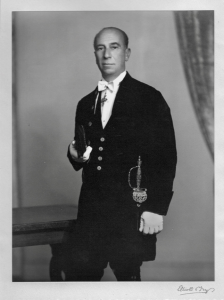 Personally curated from top to toe by owner Natali Martini, S Paul Hotel is like no other. The building was part of Natali’s inheritance and her love of family and history led her to renovate it and create a home away from home for all her guests. Natali named the Hotel as a tribute to her great-grandfather, Sir Paul George Pavlides. Paul Pavlides was knighted by Queen Elizabeth II as Sir in 1955. Special mention is made in The London Gazette in 1955, which states that  “Whitehall, March 18, 1955: The QUEEN was pleased on Tuesday, the 15th instant, at Buckingham Palace, to confer the honor of Knighthood on Paul George Pavlides, Esq., C.B.E.. Her Majesty’s approval of this Knighthood was signified on 1st January 1955” (The London Gazette, 18 March, 1955, pp. 1630). The knighthood was conferred as a New Year Honours 1955 appointment and was one of Queen Elizabeth’s II appointments to reward and highlight good works by citizens of those countries. They were announced on the 1st of January 1955 to celebrate the year passed and mark the beginning of 1955. Sir Paul Pavlides, a prominent member of the local society and a successful entrepreneur, was given the honor of Knight Bachelor. Following such important history, it would be only natural to name the hotel S Paul, preserving the spirit of a great man whose work and social contribution was very important for Cyprus.

Excerpt from the London Gazette

This website uses cookies to improve your experience while you navigate through the website. Out of these, the cookies that are categorized as necessary are stored on your browser as they are essential for the working of basic functionalities of the website. We also use third-party cookies that help us analyze and understand how you use this website. These cookies will be stored in your browser only with your consent. You also have the option to opt-out of these cookies. But opting out of some of these cookies may affect your browsing experience.
Necessary Always Enabled
Necessary cookies are absolutely essential for the website to function properly. These cookies ensure basic functionalities and security features of the website, anonymously.
Functional
Functional cookies help to perform certain functionalities like sharing the content of the website on social media platforms, collect feedbacks, and other third-party features.
Performance
Performance cookies are used to understand and analyze the key performance indexes of the website which helps in delivering a better user experience for the visitors.
Analytics
Analytical cookies are used to understand how visitors interact with the website. These cookies help provide information on metrics the number of visitors, bounce rate, traffic source, etc.
Advertisement
Advertisement cookies are used to provide visitors with relevant ads and marketing campaigns. These cookies track visitors across websites and collect information to provide customized ads.
Others
Other uncategorized cookies are those that are being analyzed and have not been classified into a category as yet.
SAVE & ACCEPT
Book Now